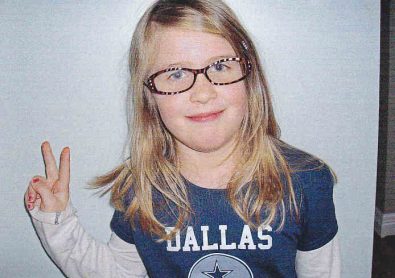 She had just changed schools and her new friend, Amy, wore glasses. So did her new teacher, Ms. Manning.

Madison’s mother said “Madison there is nothing wrong with your eyes but I will make an appointment with the eye doctor – just in case!”.

She tried on Grampy’s glasses but they were too big and the room looked too blurry.

She tried on Grammy’s glasses which sat on the end of Grammy’s nose but they made close up things look too big and far away things look fuzzy.

She tried on Amy’s glasses and they fitted perfectly but when she tried to read, the letters looked all squiggly and fat.

One day, Madison found an old pair of glasses with one lens missing. Grammy suggested taking the other lens out so Madison could wear the frames.

But when Madison got home from school she could smell fresh baked muffins in Grammy’s kitchen. “Please may I have a muffin, Gram?” she said. “Sure thing” said Grammy, “Just help me wrap the extras for the freezer”. “The kids laughed at my glasses because there were no lenses. I need lenses Gram”. Just then Madison realised that the Saran wrap they were using was clear like a lens. She asked Gram to help her wrap her frames.

Madison had glasses with “lenses”.

The next day, when Madison got home from school, she went to Grammy’s kitchen again for a left-over” muffin. “Why so sad Madison?’ said Gram. “I put my finger through my ‘lens* ” said Madison “and the kids laughed again”. Grammy took a box of strawberries out of the fridge. “These will cheer you up” she said. “Oh Grammy, not the berries, I want the box. It’s clear and plastic, just like lenses. Will you help me cut the shapes and stick them in my frames?”

Madison had glasses with better ‘lenses’.

The next day, when Madison got home from school, she went to Grammy’s in case there were any strawberries left. “Why so sad Madison?” said Grammy who had one pair of glasses on her head and one pair on the end of her nose.

“My lens kept popping out and Cameron stepped on it by accident”.

“Well, I have good news” said Gram “the eye doctor called and will see you next week”.

Madison was sure that she would now have real glasses.

When Madison went to the eye doctor, he was very pleased to hear that she was in Grade One because she would know all her letters and could read his charts. He got her to look into strange machines; he shone lights in her eyes; he got her to look through lens after lens and, finally, to read smaller and smaller rows of letters. Madison was proud to know all her letters, even the smallest ones on the bottom line. “I have good news for you Madison” said the doctor “You have great eyes and you DO NOT NEED GLASSES”.

Madison did not think this was good news.

“I didn’t really think that you needed glasses. Madison” said Mom, “but I know you want them so much….so, I found some for you to wear. They are just like real glasses but the lenses are plain”. Mom took a bag from her purse and handed Madison a beautiful pair of red framed glasses with the picture of a small black cat on each side arm

Madison finally had her glasses.

please find enclosed the true story of Madison’s desire for glasses. It occurred to us that this might be the kind of story that you could use. We recently heard about ‘Luke’ from Port Hood and Madison urged me to send her story to you for consideration.

All this happened in Grade 1 and Madison and Amy are still best friends in Grade 3 now. Maddie still wears glasses frequently, as you can see from the picture. Another desire of hers was to have crutches – we got her some last Xmas. We hope she never really needs them! Now she is hoping for braces on her teeth….will it never end!

We hope you enjoy the story and the pictures.